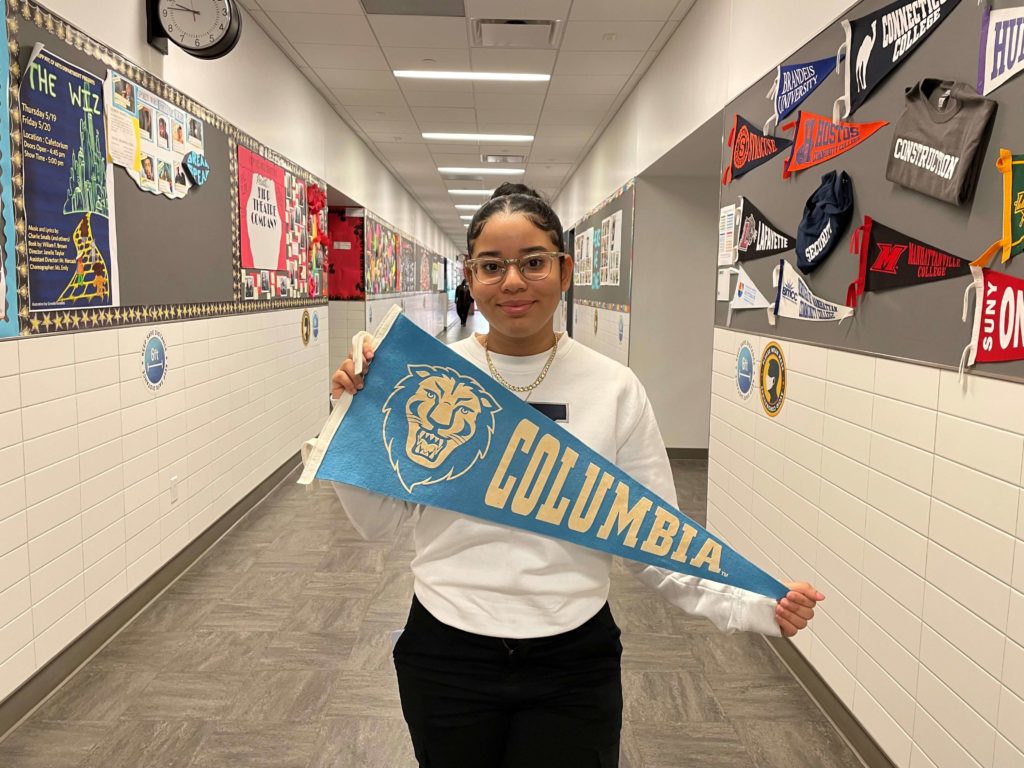 Carla came to the Bronx from the Dominican Republic when she was 12 years old, beginning a new life in an unfamiliar city and a world away from her childhood home and extended family. Six years later, Carla is graduating as the valedictorian of KIPP NYC College Prep High School’s Class of 2022. This summer, she will enroll at Columbia University to study Political Science.

“I came in 7th grade. My family wanted me to have opportunities they didn’t have. They wanted me to get the education they never got. The idea of the American dream is what we were chasing. They always told me education was the way out. As long as you keep pursuing your education, you keep doing what you do, and you’re gonna do great things. They wanted me to be able to finish college because most of them didn’t get past 4th-grade education.”

When she arrived in the United States, Carla spoke only Spanish, which made assimilating, making friends, and adapting to a new life in a foreign country particularly challenging.

“Learning the language was really hard for me. Just trying to adapt to the culture – everything was so different. The weather, the food, the people, everything. It was kind of weird at first since I was the newcomer. I would try to listen to and watch things in English with subtitles in Spanish even though I couldn’t understand it. That helped me get used to the sound of the language. I used to have this little dictionary that I literally took with me everywhere. It became my best friend during those times. I would read and I would translate word for word. That helped me ease into the language.”

From an early age in the DR, school came easy to Carla. Despite being an English-language learner and going through the challenges of freshman year, she came into her own sophomore year as she found mentors and activities that built her confidence and sparked her love of learning.

“I met this one teacher; her name is Ms. Lantigua. She helped me tremendously to find confidence in myself and find my voice. And being able to speak out even with those insecurities. I started getting more involved. Even though it was through the pandemic, I was a peer mentor for the sophomores and freshmen. I got involved with peer leaders. I was a teacher assistant; I would help them grade; I would help them come up with lessons. I became involved with a Literature Club in which we discussed different social issues that were going on at the time. I joined the Debate Club as well.”

Carla cites the support from the High School’s College and Career Counseling team as being instrumental in her growth and desire to take advantage of her experiences, interests, and academic talents as she progressed toward college.

“KIPP has a great College and Career team that since freshman year you are assigned to a counselor. They get to know you, so they know what types of things you are interested in. Wherever they see an opportunity, they would be like, ‘oh, I think you would like this because you told me you were interested in this. Why don’t you try it out? You might be interested in peer leadership.’ It is helpful that you were introduced to your College and Career Counselor since the beginning of [freshman] year. They get to know you. You get to have that connection with them. They are offering you things that you are interested in and building that interaction.”

The curriculum at the High School has also given Carla a sense of what she wants to study at Columbia.

“One of the greatest things about KIPP is that you have a lot of options when it comes to selecting classes. If you have an interest in a specific field, you’re able to try it out and get into it. I wasn’t sure if I wanted STEM or the social sciences, so I took AP Chemistry last year. This year I took AP Bio. I’m taking AP US Government. Just to be able to try out those options and learn more – even if you aren’t planning to major in college. I know now that I’m not going to do STEM, but I still loved everything about AP Bio. The class, the teacher – everything was nice.”

Carla cites her family’s support as being instrumental in her success.

“I would like to think I make them proud. They are just always so supportive. When I got into Columbia, they didn’t know what it meant to get into an Ivy League. But they were just so happy for me that I got into wherever I wanted to go. My family is very tight-knit. I hold a lot of responsibilities in my family. I wanted to be close to them for undergrad.”

As she looks ahead to the next stage in her life, Carla wanted to share these sentiments with her classmates: