I’m doing a big climb to raise money! For the fifth year in a row, I’m taking on an increasingly challenging climb to raise money for KIPP charter schools in support of the thousands of KIPPsters climbing the mountain to and through college – a challenge that has become immeasurably harder, so they need our help more than ever.

Even better, we’ve received a challenge grant so your donation will be matched this year, doubling your impact!

In June, I’m going to tackle the granddaddy of them all: the Nose of El Capitan in Yosemite National Park, a 3,200-foot sheer granite wall that every climber dreams of doing. (It’s parallel to the route Alex Honnold climbed in the movie Free Solo – but I’ll be doing it with ropes and, I anticipate, in four days, not four hours!)

Over the past four summers, I’ve raised nearly $400,000 by climbing in the Alps and the Dolomites. In addition, I’ve run the last four 24-hour World’s Toughest Mudder obstacle course races, completing 260 miles and more than 1,000 obstacles, winning the 50+ age group twice, and setting the all-time age-group record of 75 miles in 2016. So I’m no stranger to pain, suffering and adrenaline… 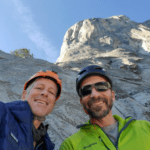 But climbing the Nose of El Cap is a whole different level of challenge – it’s like running all four of those 24-hour races back-to-back, thousands of feet in the air.

It will be very challenging for a relatively inexperienced climber (and old geezer) like me, but after five days of training in February in Yosemite with my friend (and IFMGA-certified guide), Paul Koubek (see pictures below), we’re ready. I can’t wait!

On our final day in February, we climbed part of the way up the Nose and then rappelled down. Here’s a picture of us walking toward the base of El Cap.

As we got nearer, we could see Paul’s wife, Breezy, climbing with a friend a few pitches up – you get a sense of how massive El Cap is by the tiny specks that they are (circled). 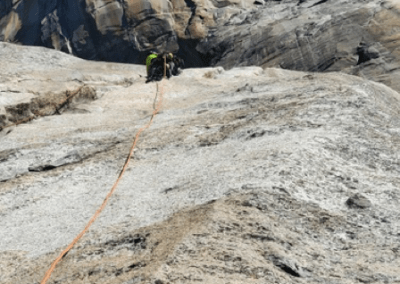 Here’s a picture of Paul leading a pitch. 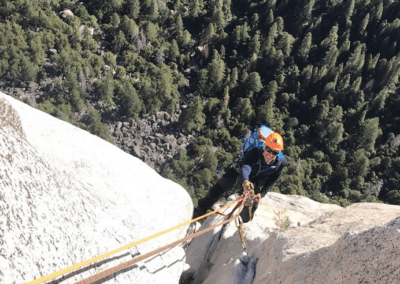 Here I am, coming up behind him, using “ascenders” to pull myself up the rope that Paul has set (the Nose is far too difficult for me to free climb, so I’m doing what’s called “aid climbing”) 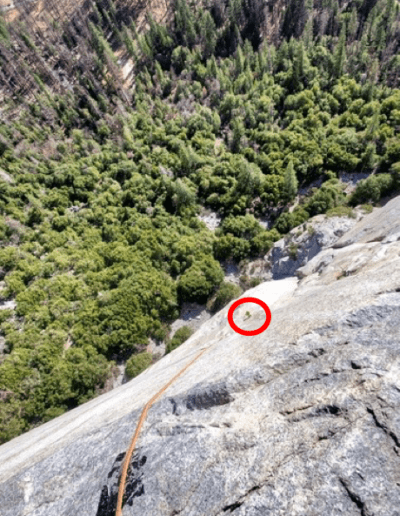 Lastly, here’s a view from the rappel down – that’s Paul circled.

For more pictures and a detailed description of what big-wall aid climbing is all about, see what I posted after my February trip.

Serving on KIPP NYC’s board for nearly two decades, I’ve seen firsthand the transformative education the schools provide, so I would be grateful if you would make a donation, which will be matched 1:1, to support my climbs so more KIPPsters can make it to and through college.