Frank: Thoughts and Reflections from a KIPP NYC Founder 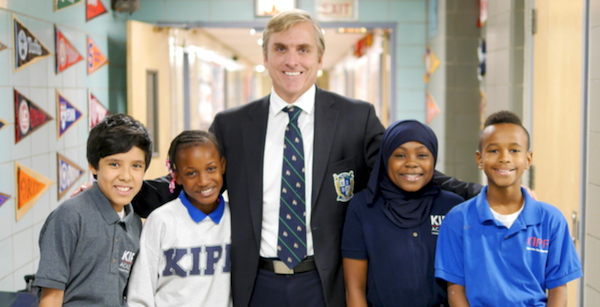 Frank Corcoran, Principal of KIPP Academy Middle School, is leaving KIPP at the end of the 2020-21 school year after three decades of teaching and leading at KIPP. Along with KIPP co-founder Dave Levin, Frank was a founding teacher at KIPP Academy, which started in 1995 as the first KIPP school in New York City. He wrote the following letter to his staff at the end of May.

Dear George,
Remember, no man (or woman) is a failure who has friends.
Thanks for the Wings!
Love, Clarence (From “It’s a Wonderful Life”)

This is my 30th year in education. I started my teaching journey when I joined Teach For America in 1991, and through that organization, I spent the first four years of my teaching life in Houston, Texas, where I was the young, idealistic, and creative teacher who believed that all of the older teachers in the school just didn’t get it … whatever “it” was. Now, so many years later, I find myself looking ancient in Zoom meetings surrounded by a youthful assemblage teachers’ faces, all of whom are secretly thinking that I am too old to get it… whatever “it” has come to mean in 2021.

This has been a very challenging year for most, and I would certainly include myself on the list of those whose resolve was tested over the past 12 months, though any injuries I have incurred have been self-inflicted. Like the central character in the Bronx Carol, I have been tortured by the ghosts of my poor choices and haunted by the repercussions of my failures as a leader, failures that have had a negative impact on both the culture of this school and the morale of my staff. And, the fog of failure that has been hanging over me has been noticed. Recently, a fifth grader said, “Mr. Corcoran, your voice used to be so light and cheerful, but ever since you announced that you are leaving, your voice has been lower.” It is an interesting comment on pandemic conditions that our children have grown more attuned to the sound of our voices than the look on our mask-covered faces. It is also an interesting window into my own fragility that the observation made in the previous sentence was meant to deflect the pain of understanding that even a 10-year-old kid could see that I have been in a funk.

As much as I believe in the importance of making mistakes as a learner, I have never been good at dealing with failure. I hate losing. I had to stop playing chess a few years ago because I was always tempted to knock the board over when I lost a game, and I really didn’t like that side of myself. Making mistakes as a leader has been especially painful because it’s not just my ego but the whole school community that suffers when I fail, and I have spent most of the past ten years beating myself up over a constant stream of reminders of my shortcomings, my many, many shortcomings. Perhaps because the hustle and bustle of normal school life was replaced by the monotony of Zoom meetings and the slow pace of hybrid learning, over the past year I was left with too much time to dwell on my inadequacies, and I began to spiral downwards. I reached a low point about a month ago when I sat down to write my reflections for the notes and couldn’t think of anything to say. In fact, this is the first time I’ve written in this space since then.

Though I had resolved to finish out the year with my head down and walk away, gritting my teeth, and taking some solace in the fact that I had, at least, resisted the urge to knock over the metaphorical chessboard, my fellow principals tugged me out of my doldrums on Thursday [May 20th] with an extremely well-timed act of kindness.

I have never been a fan of meetings, and the monthly all-day meetings, ironically known as “One Love,” have been one of the uncomfortable conditions of my role as principal. Last week marked the final time that I would have to attend an in-person One Love meeting, and for most of the morning, since the discussion centered on plans for next year, I found myself wondering why it was necessary for me to attend since (incoming principal) Tristan Fields was sitting there next to me … and he is already a better principal than I ever was. But, during the lunch break, the principals each gave me gifts, most of which were humorous, and they told stories, sang songs, and read poems that truly lifted my spirits.

So, I am going to attempt to swim off of my island in order to end my time at KIPP on the mainland in the pleasant company of some of the most talented teachers I have ever known. Working with all of you has been an honor and a privilege, and I would like to thank all of you for dedicating your lives to such a vital profession. Our school is a better place thanks to the dedication and creativity that you bring to your work every day. Thank you for helping us to keep our promises to students and families.